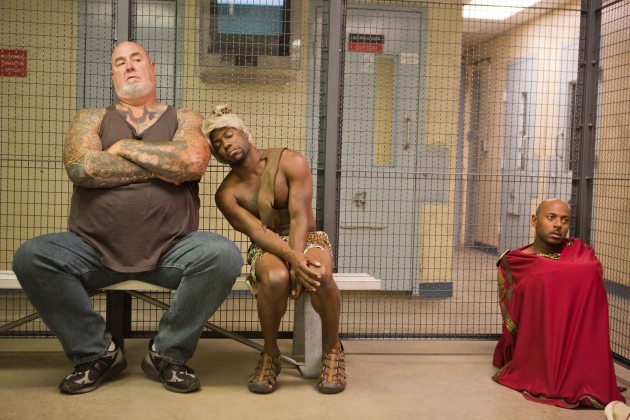 The last film used Steven Harvey’s best-selling relationship book to create a loose story around the battle of the sexes, this time around there isn’t even such an excuse.

Set in Las Vegas, the five couples find their relationships tested, in the most unlikely of situations. Candace (Regina Hall) and Michael (Terrence Jenkins) want to tie the knot but his overly domineering mother (Angela Elayne Gibbs) keeps getting in the way.

And while the men and the women try to beat each other at having the best stag/hen do on the glittering Las Vegas strip you can’t help but feel someone was trying to create a bad Hangover/ Bridesmaids mash up and not succeeding.

And doesn’t even matter that there are a few individual performances by some of the cast and even the few funny moments that Kevin Hart does supply are too over the top, predictable and nothing new.

Think Like a Man Too was a massive flop when it came out in the USA earlier this year and it is doubtful that it will score big in the box office here either. Don’t waste your money on a ticket, as the only thing you’ll probably enjoy is your popcorn.

The contents of this blog is copyright © to me Jensine-Bethna Wall and although I am happy for you to post, re-post or reference my thoughts, ramblings and miscellaneous outpourings, to do so you must always make it clear that the content belongs to me and me alone and I have the right to be identified as the author, this is only for non-commercial purposes If the content of this blog is to be published or broadcasted by any for of media for commercial purposes I do maintain the right to be contacted and asked for permission, in some cases even payment. Any unauthorised broadcasting, public performance, copying or re-recording will constitute an infringement of copyright. I grant permission to reproduce for personal and educational use only. Commercial copying, hiring, lending is prohibited, otherwise all rights reserved.
Loading Comments...
%d bloggers like this: