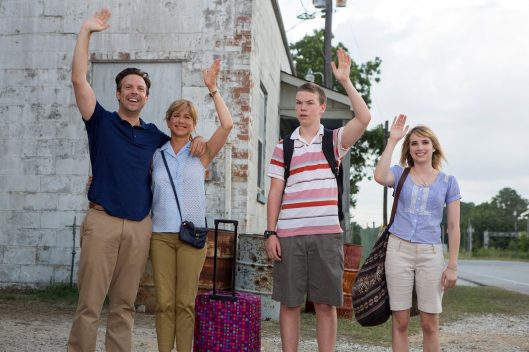 Small time dealer David Clark (Jason Sudeikis) seems to be happy with his uneventful and meaningless life. But when he is beaten up by thugs and loses his bosses money he is forced into becoming a big-time drug smuggler.

In order to transport a massive stash of weed over the Mexican boarder David comes up with a ludicrous idea. He hires a monster of a campervan and hires a family. His motley crew of a ‘the Millers’ are neighbour and stripper Rose O’Reilly (Jennifer Aniston) as his wife, runaway Casey (Emma Roberts) his daughter and neighbour nerd Kenny (Will Poulter) as his son.

Of course nothing goes as planned and ‘the Millers’ end up on an adventure of a lifetime.

Sadly the script just doesn’t hold up and the crude innuendos and sexual crudeness is often just not funny. Aniston as stripper Rose is not believable; even though her body is incredible she just doesn’t have the dirty sexiness needed for the role. But thankfully her comedic talent saves her otherwise weak performance, as she does have good timing.

Sudeikis does have a certain charm but his performance is a little threadbare and messy. And it doesn’t help that his lines are too bland to really inspire any likeability.

The contrast between Roberts and Poulter couldn’t be bigger. Roberts is too “vanilla” to pull off her role as a hard-done-by teenager who hates the world and lives on the street. However British actor Poulter is quite good, he somehow manages to be sweet and vulnerable in the midst of all the chaos.

We’re the Millers is another film that cannot live up to its promise. Its weak screenplay, crudeness and unlikely story all jar. And while there are a few laugh its attempts to combine family sitcom and lewdness doesn’t work, making most scenes cringe-worthy and uncomfortable.

So if you are expecting something like director’s Rawson Marshall Thurber Dodgeball, you will be disappointed. We’re the Millers just isn’t very funny, too ‘over-the-top’ and juvenile.