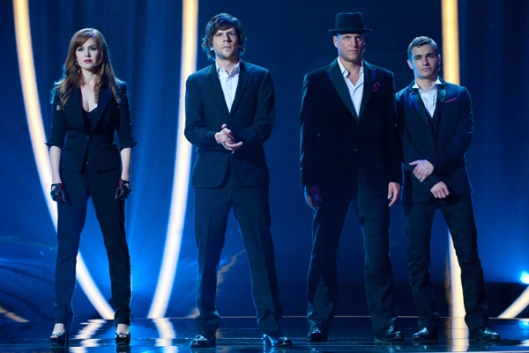 Now You See Me is an intricately woven story of intrigue, deception, revenge and of course magic.

When four low-level magic performers find magical tarot cards they poll their talents and form ‘The Four Horsemen’ (Jesse Eisenberg, Woody Harrelson, Isla Fisher, Dave Franco). In front of a live crowd they convince the world they transported one of their audience members to a Parisian bank stealing 30 million Euros in the process.

Of course this gets the police and even Interpol involved and when detective Dylan Rhodes (Mark Ruffalo) and agent Alma Dray (Melanie Laurent) team up an elaborate game of cat and mouse transpires.

When magic-debunker Thaddeus Bradley gets involved the heists become more and more daring and the plot weaves in and out of a series of smaller background stories.

Even though the sets are impressive the story lives from the witty dialogues and divers characters. Mark Ruffalo is excellent as his usual disheveled self and even Jesse Eisenberg isn’t as annoying as usual.  Woody Harrelson is in his element and both Morgan Freeman and Michael Caine add that little bit extra of gravitas.

And while the audience attention is held, many twists and turns drawing it this way and that, the plot fizzles out towards the end. It feels as if director Louise Leterrier (Clash of the Titans, The Incredible Hulk) was in too much of a hurry to raise the curtain on the elaborate plot.

But overall Now You See Me is an enjoyable thriller filled with exciting sets, a strong acting and a good storyline for those who do believe in magic and keeping secrets a real treat.