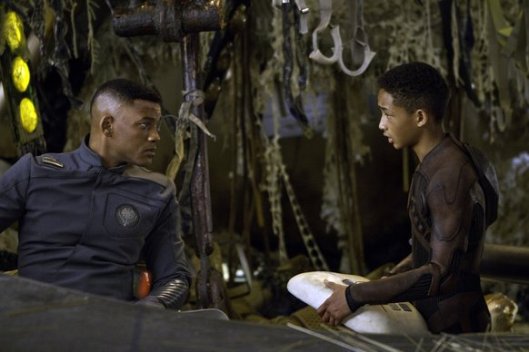 Will and Jaden Smith  in “After Earth”

Like the spacecraft in the film, After Earth is a crash-landing and no more than a 100min long promotion of Jaden Smith’s mediocre acting performance.

The father and son duo are left stranded on Earth 1000 years after humankind left the planet to evolve into an inhabitable place. With Cypher paralysed and trapped in their spaceships cockpit, Kaitai sets out to recover a lifesaving beacon on his own. As he makes his way through some beautiful scenery he encounters deadly animals, dipping temperatures and has to evade a deadly alien attack.

Punctuated with flashbacks and meaningless, cringe worthy dialouges and monologue the storyline fails to impress and even the CGI looks cheap.

Overall After Earth is yet another of M Night Shyamalan floundering attempts to direct a good film.  And even though Will Smith has top-billing, Jaden is left to carry the bulk of the film on his own, which he just can’t.

After Earth is definitely not worth missing a sunny evening for and its only promise seems to be that of a major summer flop.