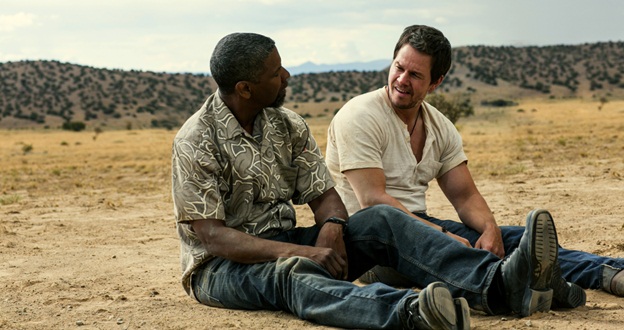 Do you know the saying: Never rob a bank across the street from a diner with the best donuts in three counties? Well Bobby Trench  (Denzel Washington) and Marcus ‘Stig’ Stigman (Mark Wahlberg) do, so they blow up the diner! With this explosive opening scene 2 Guns sets the tone for an action filled summer blockbuster.

Bobby and Stig are a team, or at least the seem to be one. But when the bank heist goes wrong they soon discover that they are not who they said they were.  Both are undercover, Bobby from the DEA (Drug Enforcement Administration) and Stig is naval intelligence, and both are investigating a Mexican drug lord called Papi Greco (Edward James Olmos).

This is just the first twist of many throughout the film. However it’s not the plot that makes for good viewing but the relationship between the two main characters.

Like in so many other “buddy” films director Valtasar Kormákur has paired an unlikely couple and created enough friction to keep the viewer interested. Combined with well-written quips by screenwriter Blake Masters and Wahlbergs off –the-cuff remarks 2 Guns is entertaining, funny and, true to its graphic novel roots, a little violent.

However there are several flaws.  Why does no one ever notice Bobby and Stig hanging around well-to-do suburbs in a very loud and obvious-looking Dodge? How did Stig’s commanding officer Quince (James Marsden) find out about the bank Tres Cruces? And what happens to the police without their donuts?

A bigger issue is Paula Patton. As Washington’s love interest and handler Deb, she may be very beautiful but she is neither femme fatal nor damsel in distress and leaves the viewer wondering what she is doing in the film other than getting in the way.

The contents of this blog is copyright © to me Jensine-Bethna Wall and although I am happy for you to post, re-post or reference my thoughts, ramblings and miscellaneous outpourings, to do so you must always make it clear that the content belongs to me and me alone and I have the right to be identified as the author, this is only for non-commercial purposes If the content of this blog is to be published or broadcasted by any for of media for commercial purposes I do maintain the right to be contacted and asked for permission, in some cases even payment. Any unauthorised broadcasting, public performance, copying or re-recording will constitute an infringement of copyright. I grant permission to reproduce for personal and educational use only. Commercial copying, hiring, lending is prohibited, otherwise all rights reserved.
Loading Comments...
%d bloggers like this: