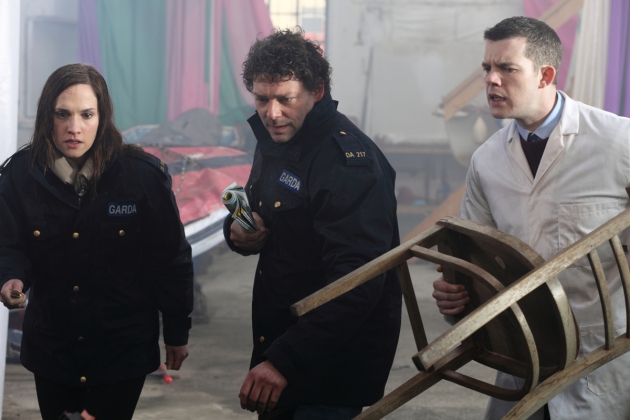 With the arrival of uptight Garda Lisa Nolan (Ruth Bradley) on the Erin Islands Garda Ciarán O’Shea’s (Richard Coyle) life is turned upside down, and not just because of the hipflask in his pocket.  But the real problems begin when several dead, mutilated pilot whales are washed up on shore and no one knows why, except possibly fisherman Paddy (Lalor Roddy) who is keeping an alien in his bathtub.

Soon it becomes clear that the aptly named Grabbers are after the islander’s blood. Oddly enough the only thing that seems to slow the evil invaders down is alcohol. So with a storm on the horizon the only protection for the locals is a pub lock-in and getting hammered. And yes, then a battle between our drunken Garda and the Grabbers ensues.

Not only does the unique storyline of Grabbers balance perfectly between humour and horror, but the characters are brilliantly cast and the dialogues are quick, funny and very Irish.  Coyle is very endearing as the drunken Guard O’Shea and his comic timing is perfect. Bradly is lovable and quirky especially when she becomes outrageously drunk.

The supporting cast are brilliant too, Roddy shines as fisherman Paddy, David Pearse is wonderful as the local GP and Bronagh Gallagher is excellent as the Landlords wife Una. Sadly talented Russell Tovel, as the marine biologist Dr Adam Smith, is more annoying than funny, even if he does have some very good scenes and one-liners. .

Unlike many horror films the monster isn’t a letdown when it is finally revealed, as it is a truly nasty looking beast with some awful teeth.  So even if Grabbers is a funny, entertaining film there are plenty of seat jumping scares, too.

Not only has director Jon Wright managed to create a beautifully shot film, with long sweeping areal shots and some picturesque scenes, he has created a welcome comeback of the 80s horror movies.

With its well-written script, superb actors and unique charm Grabbers is a definite one to watch this summer.