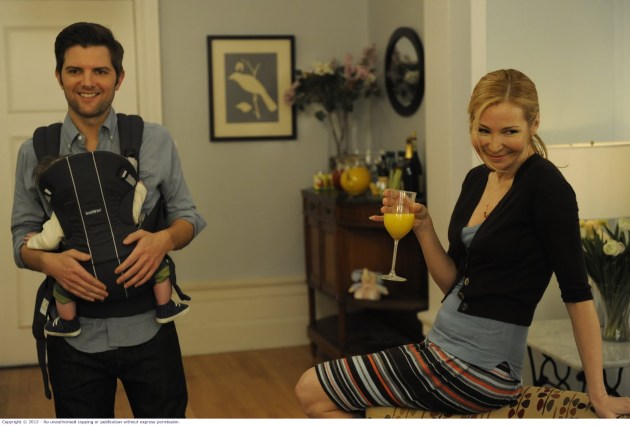 We’ve all seen it happen: friends get married, have kids and change. Not that they want to, not that they intend to but they do! Writer, actor and first time director Jennifer Westfalt and her long-time partner the mad man himself Jon Hamm , have watched  this happen to their friends and decided to turn experience into the film “Friends with Children”.

This funny, heart-warming and at times very sarcastic film tells the story of six friends, two couples and two singles. It all starts off very Sex in the City with the friends having dinner in a chic Manhattan restaurant appalled by the children at the neighbouring table. When the hot and heavy couple Ben (Jon Hamm) and Missy (Kristen Wiig) return from a quickie in the toilets, Leslie (Maya Rudolph) and Alex (Chris O’Dowd) announce to their friends that they are pregnant and swear that nothing will change.

Four years later it is a totally different story. While Leslie and Alex struggle to manage two kids and have moved to Brooklyn, Missy and Ben seem to only communicate through snide comments over their baby’s buggy. Forced to witness these changes  Adam (Jason Frymann) and Julie (Jennifer Westfalt) congratulate themselves on being free and single, the only problem is they both would like kids. So as they watch their friends fall apart the singletons make a pack to have a child together, share all the benefits and responsibilities but NOT be a couple.

At first things seem to work out and both find bliss with gorgeous partners. Adam hooks up with curvaceous dancer Mary Jane (Megan Fox) and Julie finds the perfect male specimen in the delicious Kurt (Edward Burns).  But as nothing can last, not even in a romantic comedy, soon everything changes and trouble follows.

Somehow Westfalt has managed to take a seemingly mundane topic and turn it into a series of traps and twists that define the characters and show how parenthood changes them.  And while it is very funny at times and you can’t help being torn between laughing at and crying for the parents this film is still very honest and even real if you can look past the incredible beauty selected on screen.

Wigg is wonderful with her icy stares and snide comments, Hamm plays a man who regrets and thus drinks very well and Rudolph and O’Dowd make a loveable quirky couple whose warmth always shines through.  And even though Fryman does a great job of portraying a man who thinks he only wants sex to find out what he really wants is love, the show is all about Westfalt.

Not only did she direct this film beautifully and her script is witty and resourceful but her character Julie shows all the raw emotions of a woman looking for love, not wanting to compromise but knowing that time is running out.

And while you may be reminded of “When Harry met Sally” or other rom-com classics “Friends with Children” is a clever film that is not afraid to take a few risks and show life as messy and colourful as we all know it can be. A must see film of the summer, whether you are parents or not.