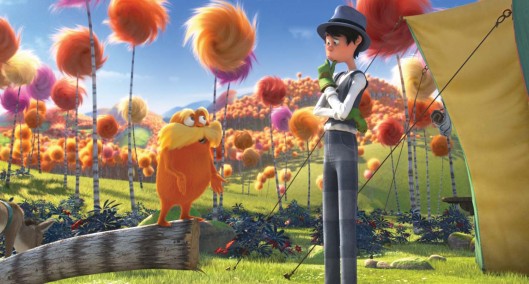 It may be 30 years since Dr Seuss published The Lorax but the topic of deforestation and ecological responsibility couldn’t be more timely. Sadly the latest animation by Illumination Entertainment (Despicable Me, Hop) is more plastic than real and even the singing and dancing can’t mask the fact that this film is all about commerce and not about saving the planet.

The story revolves around Ted Wiggins (Zac Efron), a young boy who lives in the walled city of  “Thneed-Ville”. Everything in Thneed-Ville is made out of plastic and is brightly coloured, even the pets aren’t real and trees glow at night and spin. When Ted’s crush Audrey (Taylor Swift) declares she would marry the guy who brings her a real tree Ted’s adventure begins.

Ted’s lively and feisty granny (the dame du jour Betty White) tells him he has to look for the Once-ler (Ed Helms) who lives outside the city walls, as he is the only one who knows what happened to the trees and where to find one. Escaping the clutches of the nasty mayor of Thneed-Ville (Rob Riggle) Ted finds the Once-ler living in a shack surrounded by pollution and wastelands.  The Once-ler agrees to tell Ted his story and over a series of visits Ted learns all about how the Once-ler invented the Thneed by chopping down a native Truffula tree. This act against nature summoned the Lorax, the grumpy, orange, peanut-shaped guardian of the trees. With a lot of singing, dancing and rhyming the Lorax persuades the Once-ler to not chop down any more trees, but to just harvest them instead. But when the Thneed becomes a commercial success reinforcements are called in and the Once-ler breaks his promise, destroying everything around him.  Now it is up to Ted to change the way things are and save the trees.

Unlike Wall-E, The Lorax fails to practice what it preaches and everything feels plasticy and even the forest animals and The Lorax are noisy and synthetic.  The film is loud, preachy, a little bit hysterical and very annoying. And while the animations in The Lorax do emulate Dr Seuss’s distinct quirky drawing style the graphics are more decorative than actual elements of the film.

Overall Children will enjoy the film due to its catchy music and easily learned songs and possibly the sensory overload will appeal to their sort attention spans. But the more mature audience may find The Lorax that bit too much and regret having paid for a ticket to watch such trite.