I have been rereading Stephen King’s  “On Writing – A Memoir of the Craft” , a wonderful book filled with lots of tips and tricks of the writing trade. But in essence the main point he makes, is that writing is work, you have to sit down and put the hours in, hone your skills, learn and read  as much as you can and then let your muse dust it with a little bit of magic.

Traditionally muses are seen as women dancing around in Greek garbs, floating figments, light beings, the personification of knowledge and the arts. There are nine of them, each one a daughter of Zeus (father of the Gods and men) and Mnemosyne (memory personified), and every single one of them has a specific area of expertise (see list below). As a writer you can expect a visit from the sweetly speaking Calliope, or as a poet maybe from the lovely Erato.

In our modern day muses seem to have changed, adapted, multiplied. King says his is a dude, a basement guy who smokes, grunts and ignores him while he does all the heavy lifting, but delivers the needed inspiration. This made me think about who my muse is, is she even a she? As I sit and type I try to catch a glimpse of her (yes, I think she is a she), try to get to know her a little bit. After all if I know who I am dealing with, maybe I can lure her into action a little more often.

So today my mission is to try and get to know my muse, figure out what makes her leap up from her swing (I believe she has a playful nature) and dance into action. And hopefully somewhere along the way a little bit of her muse-magic will spill onto my fingers and into my story.

Don’t wait for the muse. As I’ve said, he’s a hardheaded guy who’s not susceptible to  a lot of creative fluttering. This isn’t the Ouija board or the spirit-world we are talking about here, but just another job like laying a pipe or driving long-haul trucks. Your job is to make sure the muse knows where you’re going to be from nine ’til noon, or from seven ’till three. If he does, I assure you that sooner or later he’ll start showing up. 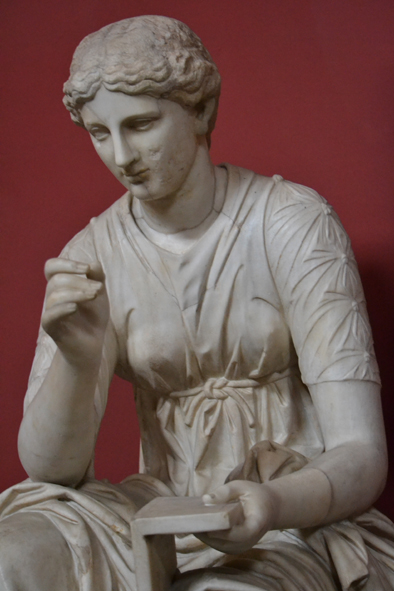 A statue of Calliope in the Vatican

Calliope: the muse of epic poetry, depicted holding a writing tablet, roll of paper or even a book.

Clio: the muse of history, mostly holds a scroll

Erato: the muse of lyrical poetry, mostly plays a lye like instrument

Euterpe was the muse of music, plays a flute like instrument

Melpomene: the muse of tragedy holds the mask of tragedy

Polyhymnia: the muse of hymns and sacred poetry, has a veil

Terpsichore: the muse of dance, also holds a lyre but also is depicted in a dance like stance

Thalia: the muse of comedy, holds the mask of comedy

Urania:he muse of astronomy, holds a globe and compass.