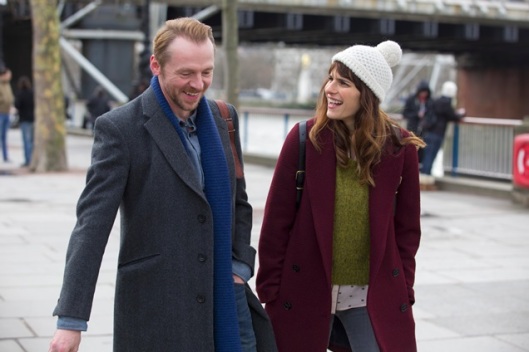 Simon Pegg and Lake Bell in Man Up

Of late there has been a lull in Rom-Coms, so it is refreshing to see Man Up hit the big screens this weekend.

Nancy (Lake Bell doing a good English accent) is a thirty-something, slightly depressed single who has given up on love. Arriving in Waterloo station Nancy bumps into Jack (Simon Pegg ) who mistakes her for his blind date Jessica, a twenty-something city-girl.

Before Nancy can explain, she isn’t who he thinks she is, Jack quotes Silence of the Lambs and Nancy decides to take her big sisters advice and be spontaneous. The newly formed couple stroll around London and get to know each other, or rather Nancy gets to know who he thinks she is.

But this is only the first of many accidental meetings and as Man Up speeds through the various stages of a relationship a few strangers cause for much excitement. Half way through the date Jack finds out he has been having a great time with Nancy – not Jessica- and the perfect date goes terribly wrong. His ex wife (Olivia Williams) complicates matters even more and by the time Nancy and Jack part ways again you can’t help but hope that the story isn’t quite finished. And of course it isn’t – the ridiculousness continues until it’s somewhat silly climax!

Over all Man Up is fun-filled film and delivers on what it promises – a good old fashioned Rom-Com. And while this film may be littered with slapstick moments and witty one-liners it never once tries to be taken serious. Simon Pegg does a good job as straight-laced Jack but the true star of the film is Lake Bell. She sparkles and shines, makes fun of herself throughout and is a joy to watch.

So if you are looking for a light fill to enjoy and quickly forget Man Up is your best bet – the perfect date-night or girls-night-out movie.