I own several winter scarves but I have a favourite one that I’ve had for years. It’s a wine red and grey tartan about two meters long and half a meter wide. Technically it’s not even a scarf but a long bit of woolen material with a seam running around it’s edges. And technically it wasn’t even mine but my sisters first – until she gave it to me when I was about 17 and I’ve been wearing it ever since.

However my mother often asks me if I don’t own other scarves since it features so heavily in my winter wardrobe, always wondering if I wouldn’t consider trying something different.

So this year I made the effort to look around the shops and see if I could find one I liked as much as the one I own, but I couldn’t. So instead I decided that maybe I should make one, knit one.

I bought a skein of teal coloured Aran wool and looked for a pattern online. After finding one I really liked I wound the skein into a ball realising I’d probably need more if I wanted the scarf to be nice and long. But not to be deterred I began knitting my new scarf.

13 rows in I had to unravel, I had miscounted and the pattern was way more complicated than I thought. So I tried again and again I had to unravel and I just couldn’t figure out where I was going wrong. I briefly considered an easier pattern but I didn’t want to be defeated by the wool.

Finally I managed to get it right and I now have 18 rows of scarf knitted. However if I keep up this pace I won’t have it finished this winter. Since I want the scarf to be long I have many hours of counting and probably unraveling ahead of me and I just hope that I either can quicken my pace or that next years winter will be cold. 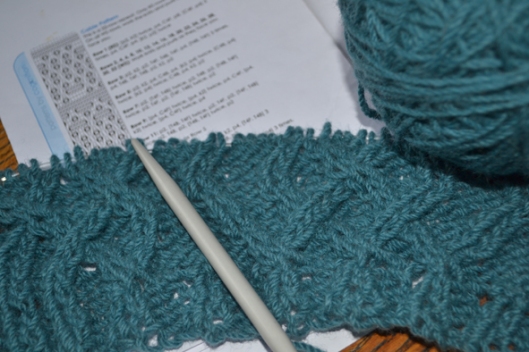 It’s that time of year again when the evenings grow cold and there no better place than sitting in front of the fire in a big cosy armchair. The only problem with that is that to have a nice fire you need wood , coal and/or turf.

Living so close to the city center may have many advantages, but finding reasonably priced fuel for the fire isn’t one of them. So when I arrived back on my bike this afternoon I was equally surprised and delighted to see a big truck unloading a huge bag of wood outside my neighbours door. Not one to miss an opportunity I asked the lovely gentleman to unload a few smaller bags into my tiny back yard – the big one was just too much for me to store – and now I’ll have wood for a good week or so.

With quite a lot of writing still left to do today I have to admit that I am now looking forward to my evening spent beside the open fire, knitting socks and enjoying the wintry smell of burning turf – and who knows I may treat myself to a glass of wine! 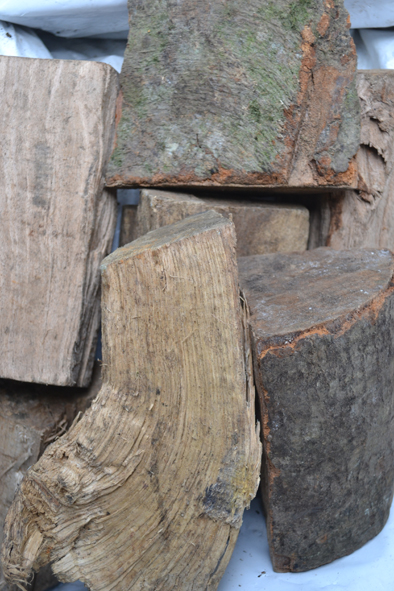 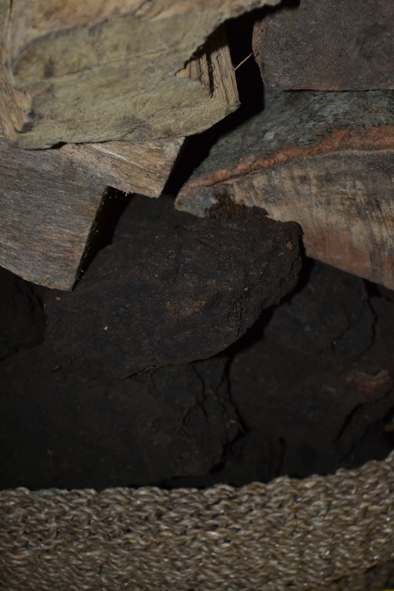 waiting by the fire place, the best combination for any open fire: wood and turf

What is a happy place? I think there are as many answers to this question as there are stars in the sky and people on this planet.

For me I have several happy places. On a wet and windy autumn afternoon it’s in front of the fire on my striped Queen’s Ann chair with a good book or a film to entertain me. On a sunny afternoon in spring it’s finding a few minutes to enjoy a cup of tea on the blue bench outside my home. In the summer it’s time spent on the beach,  the sea tickling my feet and the sun and wind on my face. Or when I get the chance to travel and have the delight of seeing things for the first time, the moment of discovery creating a sensation of pure joy. And then there is that moment, after a long tiring day, when you crawl into bed and your body just sighs in relaxation.

So choosing just one happy place for this Weekly Photo Challenge is very challenging indeed. After thinking long and hard about this I have decided that currently (since I’ve started my Masters)  my happiest place is when I sit down in the evening – after all my work and reading is done – and get a chance to work on some socks I’ve been knitting.

Happiness depends upon ourselves.

Today, my Swiss neigbour/friend and I decided that we would go down to Dublin’s fruit & veg market and get some yummy produce to make jam from.

We left this morning, perhaps a little late (my neighbour that they open at 5am and I though she knew something I don’t) but we were still in time to get a tray of plums, some blueberries, lemons and beans.

So, while my friend gets first pick of the crop I have been trying to find some good recipes online. And since my funds will be very low this year (my masters will be taking all of my euros) I have been thinking of turning the wholesale fruit into edible Christmas gifts.

Now my evening is planned and I am excited to get cooking. But for now I will tackle my to-do list and hurry the day along. And who knows, maybe it’s even time to pull out my knitting needles too – after all the temperatures are low and it feels like the perfect time to start creating socks.

Yesterday a gentle knock on my door interrupted an afternoon at my desk. My nine-year-old neighbour was standing outside holding a ball of wool and some knitting needles in her hand and asked me if I could teach her how to knit.

Unable to say no to the little girl in a ponytail I put on my red clogs and sat down on my blue bench. My young protegee watched as I showed her how to make a stitch and soon she was in deep concentration as she “went in through the bunny hole, around the tree, up she come as and off she goes”, creating one pearl after the other.

In no time a gaggle of kids was gathered around us, wondering what we were up to, big eyes, dirty faces and lots of questions. And a few minutes later a second little girl was perched on my blue bench, head bent over some knitting needles and wool.

And while it will take a lot of patience and practice for these two beginners to move on from pearl to plain,  I am sure I will never forget our impromptu roadside knitting in the sun.