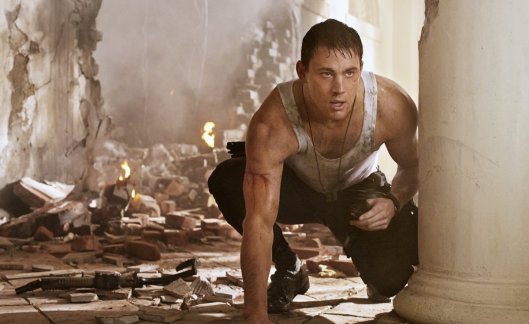 After The Day after Tomorrow, 2012 and Independence Day director Roland Emmerich has now decided it’s time to blow up the White House from within. No natural disasters or aliens needed, this time a handful of terrorists and a few corrupt politicians is all it takes. But of course there is a hero to hand to save the day.

John Cale (Channing Tatum) calls in a few favours and interviews for a job as secret service agent. Unlucky for him agent Finnerty (Maggie Gyllenhall) is not only sceptical of his abilities but knows him from his not so dashing past. Trying to not disappoint more women in his life Cale takes his angry teenage daughter Emily (Joey King) on a tour of the White House and of course politics obsessed Emily bumps into the Presidant (Jamie Foxx).

As luck would have it terrorist decided it’s the perfect day for a White House takeover and bring it down. But working class hero John won’t let this stop him from finding his daughter, who got lost in the ensuing chaos, and makes his way through gun-fire and falling debris only to find the Commander in Chief in need of a rescue. From then onwards John has a two-fold mission, find his daughter and save the President.

Like most “here-to save-the-day-movies” the character of John Cale is a close copy of Bruce Willis John McClane in Die Hard, only missing a few letters to his name and wearing the obligatory sweat stained tank top. But Tatum does a good job, not only does the shirt fit his physique beautifully, his charm and good delivery of one liners give White House Down a certain amount of flair and fun, not unlike the Die Hard series.

And it seems that America is in need of a new hero, making Tatums timing perfect, after all the ususual suspects are all getting a little too old : Bruce Willis is 55, Brad Pitt 49 and Will Smith 44.  But while Tatum is the obvious star of White House Down, Foxx is a little too predictable and bland but does have some good lines. King on the other hand often steals the limelight and is one to watch in the future. And Gyhllenhall does what she always does, is pretty, a little quirky but really just the female on the sidelines.

So while White House Down doesn’t really do anything new and tells a story already told it is well written with maybe a few too many outrageous twists. The special effects are believable, but it is Tatum who upstages everything with his good looks, on screen charm and athletic bravado.

So if you like Die Hard and a bit of a on screen demolition White House Down is definitely one to watch.

Ever seen “Armageddon“, that action si-fi staring Bruce Willis and Ben Affleck. In it a team of big burly oil rig workers go up into space to drill through and blow up an asteroid crashing down towards earth. Of course Bruce saves the world in good old Willis style, a firework of meteoric rock filling the sky. Interestingly enough this scenario may not be too far off reality.

The other night I was flicking the channels and stumbled upon a science show talking about the asteroid Apophis. The first time I heard about this hunk of rock and gas was in 2004. Astronomers had calculated that this near earth asteroid could possible enter our atmosphere in 2029 and collide with earth, but luckily that has proved to be incorrect.

My not so scientific mind couldn’t follow the calculations and measurements but what I did understand was that when Apophis passes by earth in 2029 it will be closer to us then our communications satellites.  With only 30,000 km between us and this spinning rock we will be able to see the asteroid on Friday the 13th of April (weird coincidence) as a moving bright light in our sky.  But it will be our lucky day as Apophis will pass us by and not destroy earth after all.

However there is a tiny chance, 1-10,000 (larger than the possibility of winning the lottery),  that Apophis will change it’s mind and decide to demolish life as we know it in 2036. So lets hope that by then NASA will have trained Bruce Willis and Ben Affleck to be the hero’s we have seen them be on the silver screen. And if not maybe someone else will relish the chance!

But either way we will be hearing a lot more about Apophis in the years to come, some hot air and a hunk of rock spinning around in space keeping our eyes fixed on the nights sky.

The contents of this blog is copyright © to me Jensine-Bethna Wall and although I am happy for you to post, re-post or reference my thoughts, ramblings and miscellaneous outpourings, to do so you must always make it clear that the content belongs to me and me alone and I have the right to be identified as the author, this is only for non-commercial purposes If the content of this blog is to be published or broadcasted by any for of media for commercial purposes I do maintain the right to be contacted and asked for permission, in some cases even payment. Any unauthorised broadcasting, public performance, copying or re-recording will constitute an infringement of copyright. I grant permission to reproduce for personal and educational use only. Commercial copying, hiring, lending is prohibited, otherwise all rights reserved.