For the past few days I have been staying with my brother and his family. This means that I have been playing with a two and nearly five year old – games filled with make believe and books riddled with rhymes.

To add a little bit of magic to my stay I decided it was time my niece and nephew had there own little fairy door. So last night, as the sun set and the children slept, I painted a door and my brother attached it to a wooden backdrop at the bottom of their garden.

Now I can’t wait until the little ones arrive back from the dentist and find (hopefully) the door and the magic can unfold. 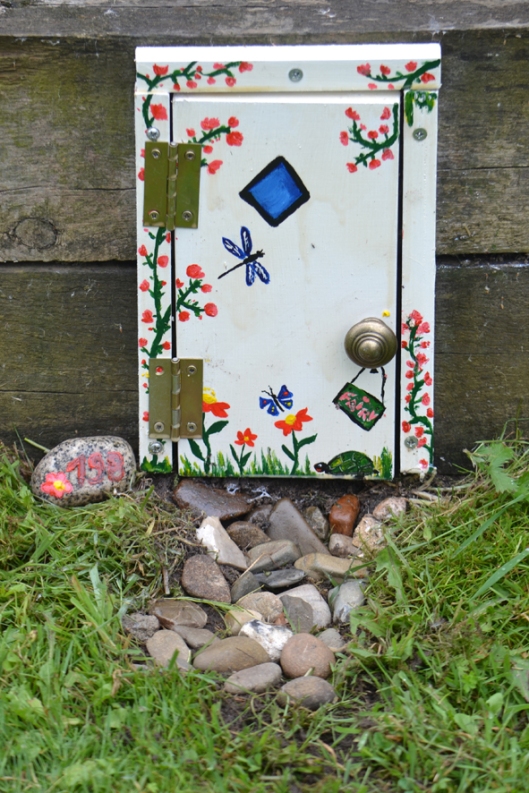 The details of my life are currently quite boring – after all I am spending my days in front of my keypad or, when I can’t write anymore, behind a book. And while I am currently trying to get the details of my novel right, and hope it is turning out better than I think it is, that too isn’t really something I can show.

But yesterday morning I noticed a few seed capsules that I think are beautiful in their own way. The tiny husks carefully designed, the smallest detail perfectly formed, and to think that they are what is left behind, not the main attraction. 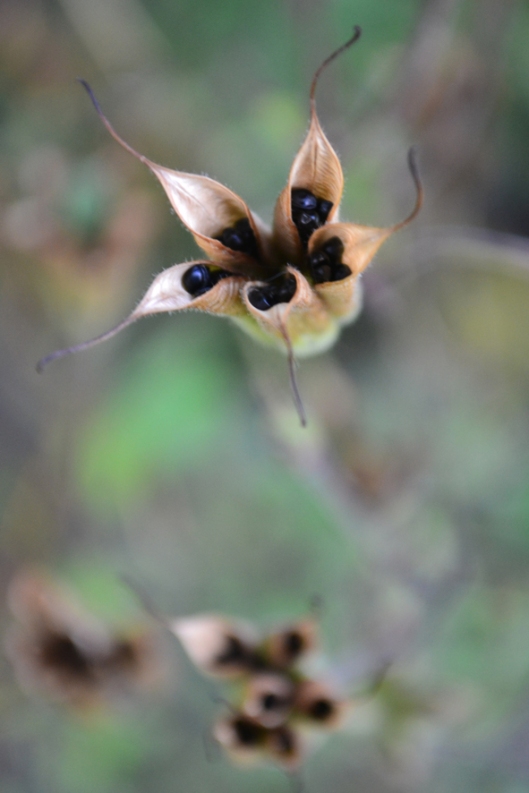 left behind after the pale blue flower fades away 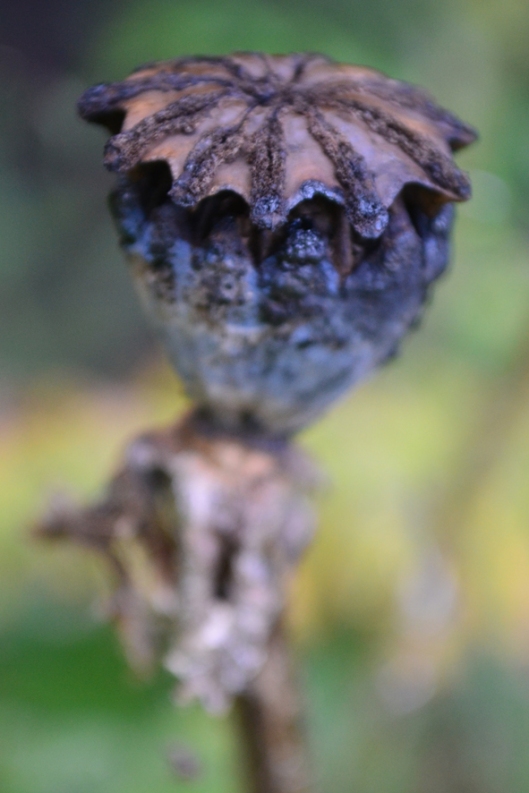 The other day my sister gave me a big green box filled with photos and negatives I had left at hers when I moved over to Ireland many, many years ago.  Once upon a time the box had been organised and sorted but now it was a jumble of places and people.

So yesterday I took the time to sort through the photos. I didn’t want to keep them all so I decided to only keep those that fit into all of three categories:

I was amazed how many photos landed on the ‘to-throw-out’ pile. Many were because I really didn’t remember the name of the people in them, faces of people I spent short amounts of time with but who had dropped out of my life, or I out of theirs. Even more of the photos where of places that I couldn’t quite identify so out they went too. And then of course there were lots of photos that where just not great, too light, to dark, blurred, off center or ‘what was I thinking’ bad.

The third time I went through the photos I sorted out all of the ones I knew I would never look at again, really how many photos do I need of the same thing? So two out of three went into the bin. After all I was keeping most of the negatives (although a good few of unidentifiable blobs did have to go too) so I can always reproduce if need be.

After I had sorted through my past a small stack of photos and an envelope filled with negatives was left and somehow it felt like I had spring cleaned my memories, freeing up space for new ones, good, forgettable and maybe even blurred.

After two weeks of (failed) attempts to access the internet from where I am staying I have finally given up. It still frustrates me and rives me demented that I can’t just quickly look something up when writing but I have arranged to drop in on my mother every now and then to surf the web and get work done, not ideal but the best solution for now.

Thankfully I have been getting some some writing done, I even managed to top my goal for 7000 words last week (I wrote 8350) and am delighted. After all I have so much to catch up that every extra word, page, chapter counts.

What has surprised me most of all is how well I write out doors, something I have never done before and was amazed to find suits me. Sadly the weather hasn’t always been on it’s best behavior so I need to use the usually dry hours in the morning to get as much done as I can.  And it seems to be working.

I have two more weeks left at the house and hope the mornings will stay dry, helping me get my writing done!

a big cup, a gift from my big sister

the blue bench I sit on

Walking around I’m always amazed at how many people seem to have their eyes glued to their mobile phones, and I often wonder what they could be missing by not simply looking up. After all there is so much going on around us, maybe not always as (seemingly) important or exciting as what is going on in the rectangle we all seem to be unable to live without, but definitely  much more real and beautiful. 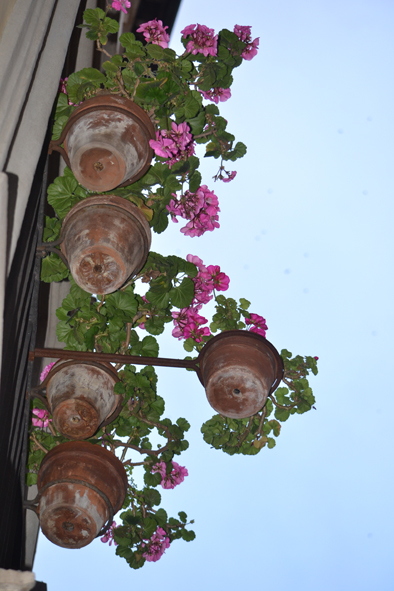 hanging from the rafters, Donegal, Ireland 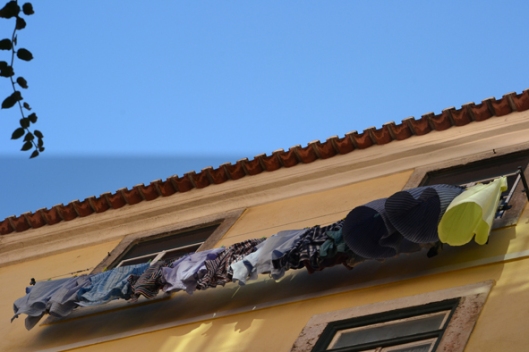 washing drying on a line in Lisbon, Portugal

hanging above my head in Amsterdam, Denmark

At the moment I am in Germany and I am currently (sort of) living an opposite life. I am speaking German, not English, I am in the countryside, not in a city. I am close to my family, as opposed to far away across the sea. I writing every day, opposed to working and trying to squeeze it it when I can. The only opposite thing that i find really annoying at the moment is that I don’t have access to the internet, for ten days now and it is driving me crazy, in Dublin I am always online and I have to say I do miss the easy access! Thankfully my mother is giving me refuge and I can write this post.

my home for the next few weeks, lovely place even without the Internet

I’ve been in Germany for a week now and it has been filled with the search for the Internet. A search that has not been overly successful.

In theory it is really easy to join the surfers of the World Wide Web, practically near impossible. My first attempt frustrated me with its failing. I bought a stick, dongle or whatever you want to call it, added on some allowance and tried to surf the web, but I never caught a wave.

The stick was by a company called Tschibo – winner in price and simplicity of usage – but their advertisement was false, just plug-in and off you go turned into me cycling back and forth into the village and calling Tschibo all to no avail. The next attempt was the local electro store, here at least I had some customer service but eve he was not sure he could provide what I need – ‘you can buy this stick (Vodafonr this time and three times the price, plus the allowance double the price as well) and give it a go, but the coverage isn’t too good and I doubt it will make you happy.’

My wonderful sister then drove me to Cuxhaven where a lovely guy from a big brightly coloured media store told me that if my hotspot doesn’t work, neither will a stick. He showed me how to get myself setup, so now, if I climb two flights of stairs until I’m up under the eaves, and sit by an open window, and it’s not raining and not too windy, and not after 5pm I can try and access the Internet. It doesn’ always work but at least I can try!

Who knew that Germany – such a successful and rich country – was so far behind when it comes to Internet coverage. And sadly this may mean I will have to cut my plans short as I won’t be able to work with so little access to the Internet. I’ll try it for a few more days and see if I can make it work, if not I’ll be packing my bags again and finding a new refuge for a few weeks.