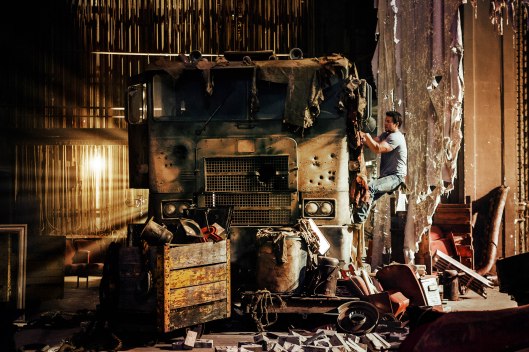 Chicago has been destroyed in the war between Autobots and Decepticons and now both are seen as a threat to humanity. To hunt down all alien robots CIA agent Harold Atinger (a nasty Kelsey Grammer) creates a special unit with the sole purpose of killing them. Ironically, Atinger is in cohorts with a new kind of evil robot, who is on the hunt for Optimus Prime.

While all of this is going on a “out-of-luck” robotics expert and inventor Cade Yeager (Mark Wahlberg) is trying to make ends meet and raise his teenage daughter Tessa (Nicola Peltz). As chance would have it Yeager buys an old beat up truck, which turns out to be a badly damaged Optimus Prime.

Before you know it the CIA storms onto the property and a man/robot hunt ensues. Yeager, a big believer in the good of Autobots, teams up with Optimus Prime, forcing his daughter and her boyfriend Shane Dyson (Irish lad Jack Reynor) to tag along.

Soon they discover that it’s not just the CIA who is on their tails but billionaire tech magnate and defense contractor Joshua Joyce (Stanley Tucci) wants them too.

Transformers: Age of Extinction is a loud film, filled to the brim with CGI and explosions, too much to take in but still not enough to distract from the lack of plot. But then, Michael Bay is the director and his last films have been more miss then hit, at this time around he can’t even blame a writers strike.

If anyone hopped that the change of cast would liven up the franchise it was a slight miscalculation. The new cast is a bit like a tic-tac, fresh for a minute but doesn’t last for the whole, absurdly long, film (165min).

Wahlberg does try a few Bruce Willis impressions a la Armagedon, but seems to lack inspiration. Peltz fills the gap that Megan Fox left open and even though she definitely has a smaller cup size she doesn’t do much either to move the story along. When she isn’t mooning over her boyfriend she is too scared to do anything of much use. But then Reynor himself is a complete wuss in the film, his only talents are driving under pressure and doing a leprechaun impression every now and then, which is even more odd since he grew up in Ireland.

Grammer is a one-dimensional bad guy, his only true motivation wanting a big payout, not quite enough to understand his willingness to kill anyone in his way. Only Tucci seems to be having a little bit of fun, but you can’t help but see him with a big purple wig as he delivers his quips very much in his “Hunger Games” manner.

Overall Transformers: Age of Extinction is just another failed attempt of the Transformer franchise, but with an unlimited budget and number five in pre-production it seems that they are willing to keep going. And it is clear that there are enough sci-fi fans out there willing to pay for three hours off film with an attention deficit disorder. 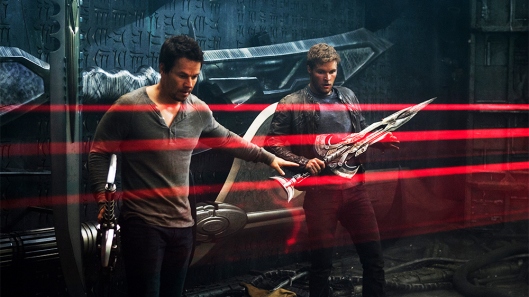 Hello again, and sorry for staying away for so long.

Over the last six months or so I have been taking a break from blogging to concentrate on my other writing and for a while it was really going well. I signed up for a writing course, revised my novel (still in progress) and even won a date with an agent. And yes three out of five of the agents I met want to read my manuscript once it’s done. This means I have to spent the summer finishing up about 40.000-50.000 (I cut about a third of what I had already written) until the end of August, just eight weeks away.

Sadly since then I have been suffering from writers-block and procrastination. So I decided to venture back in to the lovely world of blogging and get my fingers typing again. The idea is simple: if you type, it will come (yes a modified film quote).

With this in mind I am open for any helpful tips about applying bum-glue and how to turn restless thoughts into creative sentences.

Writers bloke is when your imaginary friends stop talking to you